Over the holiday period and start of the new year, SERIOUS PROGRESS has been made. One of the biggest, more fearsome and daunting obstacles that faced us was the META SCREEN.

In the META SCREEN in player should be able to see the entire solar system and be able to plot a course through the available planetoids in a meaningful way.

We already had a working model of the ALP black hole system, and Phill had previously implemented the randomly-generated planetoids actually populating the map so this was not the task at hand.

The difficulty was making this interface workable, and making it no only obvious and easy to use, but make the choices the player has available have an impact upon the game. That is still not 100% there, but it has shaped up considerably in the last month.

Here is a brief explanation of how it works: 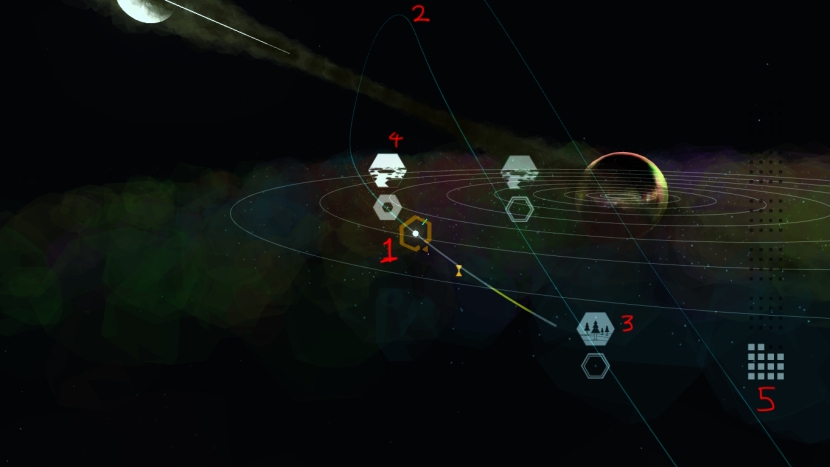 1: MOTHERSHIP. This represents where the mothership is in the system. The small triangular arrow indicated the direction of thrust. When the player applies thrust to change the trajectory. the cost in fuel pips is demonstrated here as well (more on that later)

2: TRAJECTORY. The blue lines traces the current path through the system. This is physics-based and thus you can make it go wildly off-course, (which is something we have to control to balance things out) but also you can opt to spend some precious reserve to visit more planetoids, or avoid ones that don’t have the resources you want.

3: PLANETOID ICON. Above each targeted planetoid is a hexagonal representation of it’s class. This is not exhasutive, merely giving a rough indication of what you might expect to find upon visiting.

4: TARGET PLANETOID. Essentially the same as the regular planetoid icon, however the on-course instance is less transparent and the hexagonal ring around the actual body is thicker. This is where the player will be going next. Sometimes it could be on the other side of the overall system so it became apparent that indicating NEXT! was important.

5:RESOURCE RESERVES. The right hand bar indicates how many PIPS of energy currently held in the reserve. This is important because altering the trajectory will consume pips, and the player must be able to easily see how much energy is held in reserve in order to decide which planetoid to visit.

This control system is not finished yet, and there will be more about it soon as we scrabble to make things balance out and function in the intended way, however things grind closer and closer to ‘playable’.